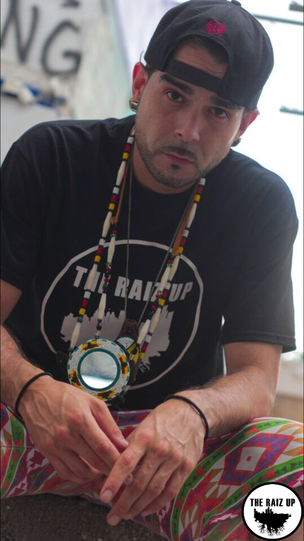 Soufy. Image provided by Kyle Mays.
Detroit is a place rooted in contradiction. Current discourses about Detroit are constructed in dichotomous narratives: urban blight and endless possibilities, depopulation and white (re)settlement -- to the tune of 8,000 from 2014 to 2015, Black American corruption and mismanagement and the white American ability to come in and “save” Detroit, a dangerous place to live and a place for opportunity. Thus, we have Dan Gilbert, and the Detroit 2.0 rhetoric, reminiscent of the pioneer language of 19th century pioneer settlers going out west to a vacant land, where no people lived, except, of course, the wide array of Indigenous people who occupied territories. There were even billboards in Brooklyn, that called for people to move to Detroit. Underneath it all, however, is an emerging Indigenous Hip Hop movement in the city.

Music and Detroit are synonymous. The smooth melodies of Motown served as the cultural sound for a whole generation. Members of the Hip Hop Generation know Detroit as the home of Eminem, Big Sean, Royce Da 5’9, and Danny Brown. These artists have placed Detroit on the map in the rap game.

Forgotten in this discussion, just like in U.S. mainstream society more generally, are the stories of Native people in cities. There are more than 8,000 Native people in living in Detroit today, and most people don’t know that. And Native Hip Hop artists like Soufy, a Sagamonk First Nations artist, who was raised in the Motor City, are making noise, challenging Indigenous peoples’ invisibility in the city and U.S. society at large. They are giving anthems to a generation of Indigenous activists and youth, who now have the opportunity to express their cultures, through Hip Hop.

Soufy grew up on Detroit’s South Westside. He attended two Indigenous-centered schools in Detroit: one of them was Medicine Bear American Indian Academy, a school founded by my aunt Judy Mays, which was the third-ever public school with a Native American curriculum. He was also affiliated with various Native cultural centers in Detroit, especially the North American Indian Association, which has been around since September 1940. These cultural influences in the gritty, urban Detroit, have helped shape him as an Anishinaabe man, coming into his own.

Living in what he calls “two-worlds,” he has been able to express his Indianness and love for his city, through his music and a uniquely Indigenous Hip Hop aesthetic: long braids, snapback, and Native bling. He is Anishinaabe. He is a Detroiter. He is a Hip Hop artist. He is an ogitchidaa, Anishinaabemowin for “warrior.” He, like other Native Hip Hop artists, are simultaneously producing music and serving as activists, challenging racism, organizing for nonviolence, working to change the conditions for those whom Marc Lamont Hill calls “Nobodies”--those most vulnerable to affects of state violence, rooted in settler colonialism and white supremacy.

What I present here is an interview I conducted with Soufy. He is currently working on his album, The Ogitchidaa Project. While you wait, you might want to check out his video, “Raiz Up & Disrupt.” Oh, by the way, the homie has also used his music as a protest against the Flint Water Crisis. Miigwetch, niijii, for making art for the people. Now, check out the interview, below.

Kyle Mays: What was it like to grow up as an Anishinaabe in Detroit?
Soufy: I look at it as living in two worlds, basically. For me, at least, I had a little bit of identity, when I was younger, going to the [Native] schools. And my grandmother saying, “miigwetch” and using the “sage,” and the only family on the block eating frybread. But being really conscious of everything, you know, that started recently. And being in the city, it’s not like there’s a big Native population in the city of Detroit, and especially in Southwest [Detroit], people look at you and think you’re Puerto Rican or something.

KM: What does it mean to be a Native Hip Hop Artist, an Anishinaabe Hip Hop Artist, and what do you want your work to speak to?
S: I feel like, if you’re Native and a Hip Hop artist, it’s giving you a platform, a voice, you have a voice, you know, what it means, it’s a duty. It’s almost like a job, a job to do. In every rhyme and song we write, we have to talk about us. With my music, what I would hope to accomplish is at least maybe change one person’s point of view, how they think, or maybe even educate them on something; or maybe if they hear a line, and maybe they just change their point of view on something. I just know that, when I’m on the microphone or when I’m performing, and when they see you with your hair braided, wearing your beads with your head up, you know, you’re not supposed to have your hair braided, "They" used to cut it off of our people. Or when you say an Anishinaabemowin word, or you say Anishinaabemowin language, or Lakota language, or any other indigenous language in a Hip Hop song, that’s doing something huge because you’re not supposed to know that language. So, I Just think being Native and having a voice is a huge thing because, like I said, They don’t even know that we’re here. And Native Hip Hop, you know, people are like, “what is that?” It’s blowing people away. So, I feel like it’s a job. I feel like being an Anishinaabe Hip Hop artist, it’s a duty, but it’s the best one you could ever have. We have to speak on who we are. We have to put it in the rhymes.

KM: Tell me about the video for “Raiz Up & Disrupt.”
S: Definitely the boarding schools, the residential schools. They were called different things; in Canada they were called residential schools, in America they were called boarding schools.  That happened to my grandmother. And this ain’t crazy generations back. My grandmother is still alive and well. My grandmother had her hair cut. The reason I wanted to show it because a lot of people don’t know about boarding schools, about residential schools, they don’t know what happened to us. I remember doing a presentation and there was a student in there that was confused. They thought boarding schools were good, where rich people send their kids for the best education. So, just putting that in there, it’s one of those things that’s sad for us to see, but it’s something that needs to be seen, and something that might spark a conversation. So, in the video I wanted to show that because it’s painful but it’s truth. That’s the kinda of artist I am. I’m gonna give you the painful truth because it’s reality. And maybe we have to see what was done to us to rise up, to say that’s not gonna happen no more; nobody’s cuttin our hair no more.

KM: Is there any words of advice or comments you have for Native youth?
S: For the Native youth, get with your elders. Really get with your elders because we all know that’s where all of our knowledge comes from. With our Native Youth, look at the state of our Native country right now. Look at the Dakota Access Pipeline, with everything that’s going on, it’s easy to get riled up and just be angry. We gotta search for that knowledge and that wisdom. So, for Native youth, and youth in general, it’s a time to be wise and get with your elders, and learn that knowledge, because they’re the only wants that can tell you. I would encourage the Native youth to get two educations. And it’s to make sure they are educated on who they are, because if you’re growing up in this country, it’s a hard thing. And then we need more Native people in this country, in these courtrooms, in these colleges, like yourself, that’s what I really wanna see. We need our Native youth to get with their elders, so they can know who they are, to get with the teachings, so they can know their medicine, and have a good connection with their medicine, and just to get that dual education, so you know who you are, and since we are on stolen land in this country, underneath this system of oppression, we need to learn what they know as well. Be proud.